Royal Caribbean Cruises Ltd has signed a long-term contract with the Port of Galveston for the construction of a new $100 million cruise terminal.

The new two-story terminal will be constructed at Pier 10 in the eastern portion of the Port of Galveston. Construction is expected to begin in April of 2020, with anticipated completion in fall of 2021.

RCL will build the terminal, then lease it from the Port of Galveston for an intial 20 year term with four 10-year extension options following that.

The new terminal will be approximately 170,000 square feet in size. The terminal will meet LEED sustainability standards, will employ state-of-the-art technology such as mobile check in and facial recognition, and will have the capacity to accommodate Royal Caribbean’s largest ships.

Following completion of the new terminal, Royal Caribbean’s Allure of the Seas will sail from Galveston.

Royal Caribbean Cruise Lines has announced that their Adventure of the Seas cruise ship will home port in Galveston, Texas in 2020.

The Adventure of the Seas will sail 4 and 5 night trips to Costa Maya and Cozumel, Mexico.

Popular amenities aboard the Adventure of the Seas include Perfect Storm water slides, Flow Rider surf simulator, an ice rink, and a variety of dining choices that include specialty dining such Chops Grille, Giovanni’s Table, and Izumi in addition to casual and main dining room options.

Explorer of the Seas, which currently sails from Galveston, is scheduled to undergo renovations and then make Miami its home.

The Port of Galveston and Royal Caribbean Cruises have agreed to construct a new cruise terminal to accommodate larger Oasis-class ships.

According to a December 5, 2018 Houston Chronicle article, the new terminal will cost Royal Caribbean close to $100 million.

Royal Caribbean is expected to complete construction of the new facility – referred to as Terminal 3 – in fall of 2021.

In addition to allowing Royal Caribbean to bring in larger ships, the new terminal should free up space at Galveston’s two existing terminals. 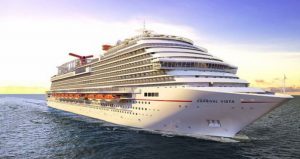 The Vista, which launched just two years ago in 2016, offers cruisers a ton of modern cruising amenities, including an top deck cock full of recreational options, lots and lots of dining options, and even an IMAX movie theater.

The Vista will be sailing 7-Night Western Caribbean cruises from Galveston, with ports of call in Mexico, Belize, Isla Roatan, Jamaica, and the Cayman Islands. END_OF_DOCUMENT_TOKEN_TO_BE_REPLACED

Carnival Freedom, Valor, Vista, and Royal Caribbean Liberty of the Seas sail from Galveston during the month of October, 2018.

Just about all of the October cruises sail to the Western Caribbean, with Cozumel, Mexico being the most popular destination. The one non-Western cruise is Carnival Freedom’s October 20th departure to the Eastern Caribbean, with ports of call in Key West, Florida, plus Freeport and Nassau in the Bahamas.