Update: The Carnival Triumph moved from Galveston to New Orleans in March of 2016.

The design theme for Carnival Triumph is “Great Cities of the World”, with dining and entertainment areas named after cities ranging from London to Rome to Monaco to Rio to Hollywood. The ship was originally launched in 1999 and got major upgrades during renovations in 2005 and 2008. The big entertainment venue is the triple-decked Rome Lounge. Room options range from seriously luxurious suites to perfectly acceptable (and notably inexpensive) interior staterooms.

Some Carnival Triumph ship facts:
Inaugural cruise in: 1999
Maximum number of passengers: 2758
Number of pools: 4
Number of bars and lounges: 18

See the list of scheduled Carnival Triumph cruises from Galveston 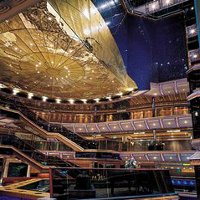 Teens aged 15-17 traveling on Triumph can get to know each other while enjoying video games and music in “Club O2”. The onboard club for “tweens” (ages 12-14) is called “Circle C”, providing video games, dancing and movies for some of Triumph’s younger guests. Everybody can enjoy some “al fresco” movie watching on the 12’x22′ LED screen in the outdoor Seaside Theatre. Adults can engage in a little healthy/relaxing activity in the sauna, at the salon,on the jogging track or in the spa.

The biggest and glitziest dining room on Triumph is the London Dining Room – designed very much in the Vegas style. The second main dining room is named in honor of Paris, where breakfast and lunch are served in an “open seating” fashion. The South Beach Club is another popular eatery, with buffets for breakfast and lunch, also a casual option for dinner. New York cuisine is just what you’d expect to find in places called “The New York City Deli” and “Coney Island Grill”. You’d better keep that sweet-tooth in check or you might find yourself visiting one of several 24-hour ice cream and yogurt dispensaries found around the ship.

Book a Cruise: Compare Carnival Triumph pricing for available dates and book your cruise at CruiseDirect.